Megan Mullally is an American actress who played Karen Walker on Will & Grace.

Mullally initially auditioned for the role of Grace Adler and admittedly did not even notice another female character to audition for.[1] Upon reading the script again, she was reluctant to audition for Karen because the part seemed too similar to Christine Baranski's character Maryann Thorpe on the 90s sitcom Cybill and Baranski already played the character well.[2][1]

Mullally's portrayal of the otherwise unlikable character gained critical acclaim and she was nominated consistently at the Primetime Emmy Awards and the SAG Awards from 2000 to 2006. Her popularity among audiences became evident that Mullally played the character several times outside of the show, and at one point was even considered for a spin-off (with Jack) and a musical of her own (with several songs actually completed), but the producers who owned the rights to the character prevented it from coming to production.[3][4]

One of Karen's most distinct characteristics was her squeaky high-pitched voice Mullally made up for the show. Mullally used her real speaking voice with Karen during the pilot only, fearing she might get fired immediately if she added that quirk on her portrayal right away[1]. She has stated in interviews that as the series progressed, her portrayal of Karen's voice naturally became more high-pitched. 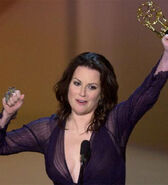 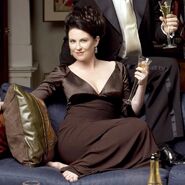 Add a photo to this gallery

Retrieved from "https://willandgrace.fandom.com/wiki/Megan_Mullally?oldid=13349"
Community content is available under CC-BY-SA unless otherwise noted.