Grace, Replaced is the 18th episode of the first season. Guest star Molly Shannon makes her debut as Val.

Grace is swamped at work and starts spending less time with her friends. Will gets acquainted with a new neighbor. Jack gets sentenced for slapping a meter maid.

Jack starts serving his 40 hours of community service for slapping a meter maid. While cleaning up the streets in New York, he picks up a phone bill belonging to Soon-Yi Allen so he and Karen decide to give her a crank call.

Grace has become increasingly occupied at work that she has been spending less and less time with her friends. She starts to feel somewhat threatened when Val, a new neighbor whom Will met at the elevator begins to spend more time with them, including their game nights with Rob and Ellen.

When Will gets sick, Val stays over to take care of him much to Grace's chagrin. Grace rushes over at the apartment to throw Val out and the two end up in a brawl. 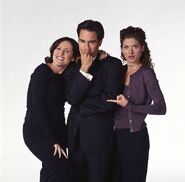 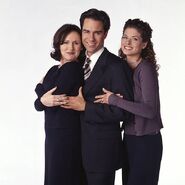 And they said Tinky Winky was the only gay Teletubby. — Will, to Jack

Isn't it amazing, Val? Will is a guy, and yet he can achieve multiple sarcasm. — Grace

Community content is available under CC-BY-SA unless otherwise noted.
Advertisement