NYU Tisch School of the Arts

Debra Messing is an American actress who portrayed Grace Adler in Will & Grace.

Messing was playing the lead in ABC's sci-fi series Prey when she was asked to audition for the role of Grace. She admits she was unsure if she wanted the role because she had been working for five straight years at that point and was thinking of taking a break.[1] However, she had a goal to work on an NBC sitcom with director James Burrows so she decided to try for the part.

Nicollette Sheridan, who would later make a guest appearance as a rival to Grace, was also a front runner for the role but producer Max Mutchnick would later recall her reading to be "too desperate" (a reference to Sheridan's later role in Desperate Housewives).[2] Messing was the last to audition and after reading scenes with Eric McCormack at the den of James Burrows' home, she was offered the role. According to McCormack, Messing won over the casting director because she was the first actress to laugh during the scene, showing how her character Grace enjoys being friends with Will.[3]

Messing, who idolizes comediennes Lucille Ball and Carol Burnett, did not want to play Grace as the "pristine" and "pretty, straight" woman but rather enjoyed more physical comedy in her portrayal.[4]

According to Eric McCormack, Messing tends to have "sudden comic inspirations" including playfully hitting her co-stars when her character is upset and jumping into their arms out of excitement.[5] 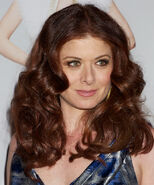 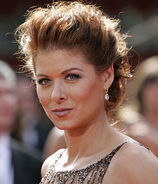 Add a photo to this gallery

Retrieved from "https://willandgrace.fandom.com/wiki/Debra_Messing?oldid=14065"
Community content is available under CC-BY-SA unless otherwise noted.